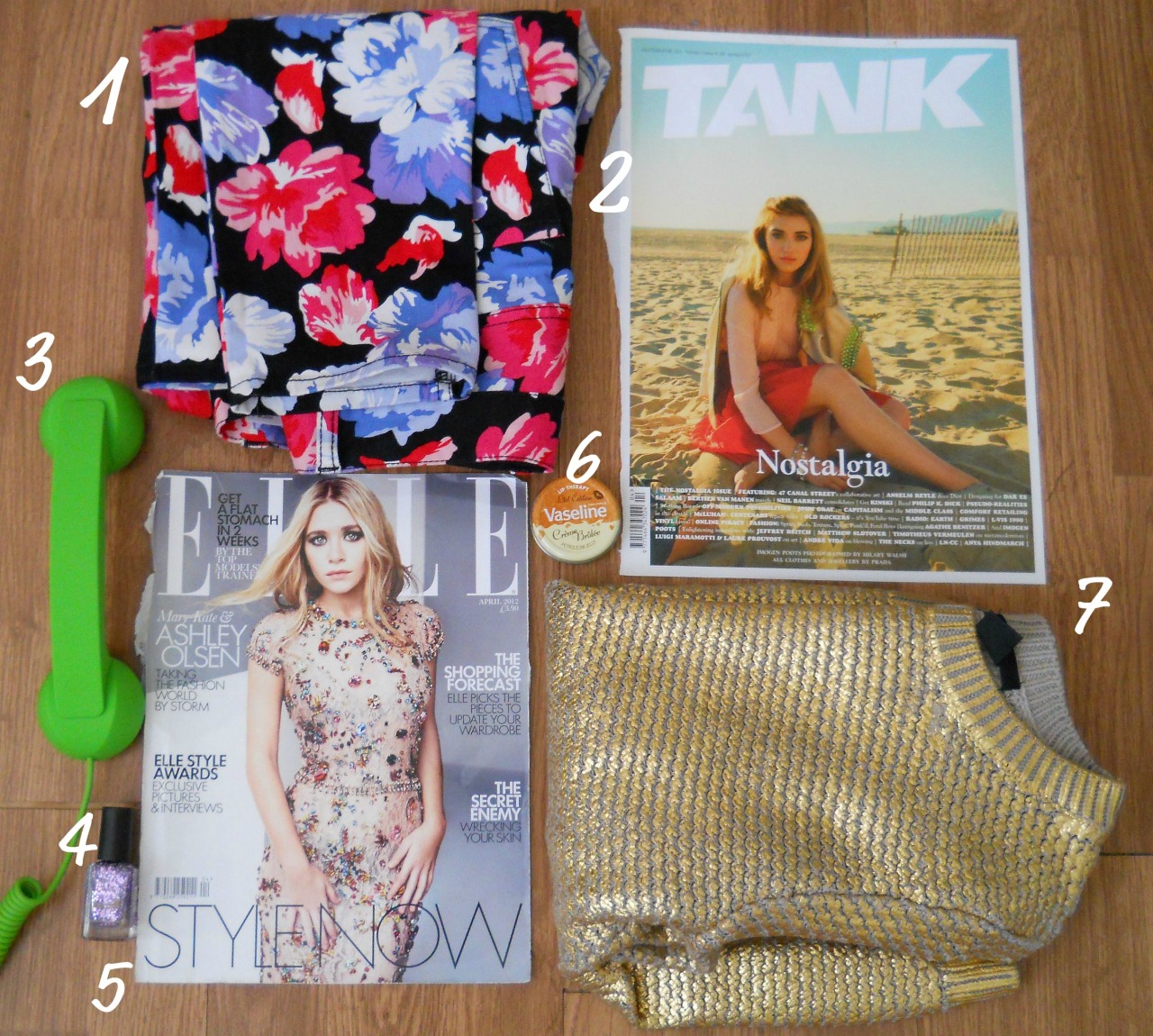 The month of March is almost over and that means it’s time for a round up of all the products I picked up this month that I’ve been loving. Surprisingly for me I did hardly any shopping this month, but the few bits I did pick up have really given my wardrobe and make up bag a new lease of life and I love them! So without further ado let’s crack on with my March picks. Enjoy!

Number one is a pair of floral jeans that I’m sure you’ve already heard about here on the blog. I picked up these gorgeous floral skinnies from Monki on Carnaby Street earlier this month and have worn little else since. As we know clashing prints are super hot for this year so I really wanted an amazing pair of trousers to work the look, and that’s when I came across these. Having never shopped in Monki before I was surprised at how reasonably priced these were seeing as they are so on-trend and look way more expensive than the £30 I paid for them. I can assure you that they’re still instore if they take your fancy, and you can shop online at monki.com too if you don’t live in the London area.

They are honestly some of the comfiest jeans I own, they’re super soft and I’ve found them so versatile especially since the weather has warmed up, they go with everything! I’ll incorporate them into an outfit of the day post soon so you can get a good look at how I pair them with other pieces, but for now here’s the picture of them I posted earlier this month. If you’d like to read the post about when I bought them you can click here to read that. 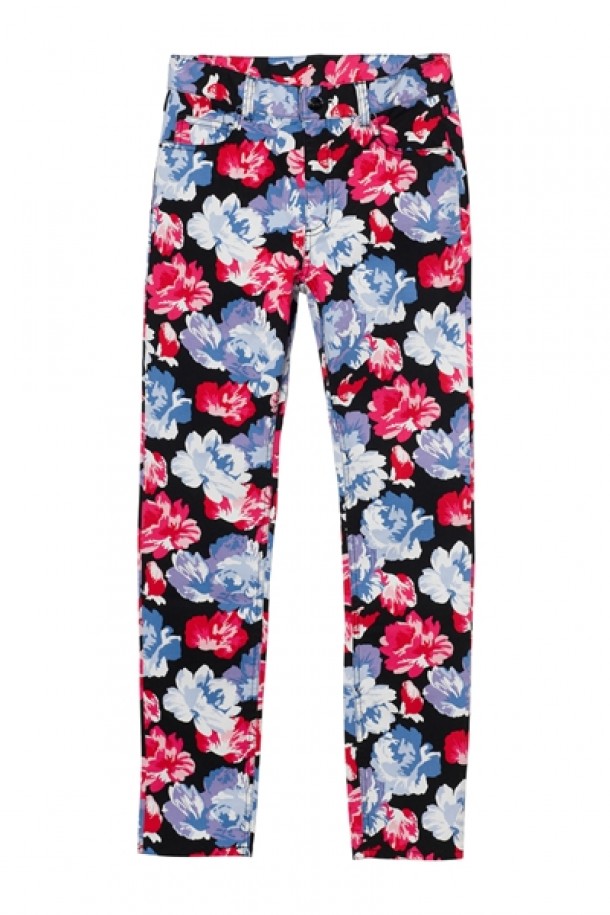 Number two is Tank magazine which is a quarterly magazine which I absolutely love for the fashion spreads. I went on a bit of a magazine binge this month and bought about six different magazines all at once in WHSmith, this being one of them. I’d just seen the lovely Jen of The Style Crusader blog about her love for print media and this magazine in particular so I thought I’d pick it up and give it a go. Predictably my favourite visuals from the mag are the Imogen Poots pictures, one of which is used on the cover. Dressed head to toe in Prada throughout the spread Imogen looks absolutely beautiful and I couldn’t resist pulling out some of the pictures for my ever expanding collection of scrapbooks.

I know lots of people hate the thought of ripping up their favourite magazines, but personally I enjoy pages more when I’ve got them in my scrapbook which I revisit very regularly. Although I do keep a lot of my favourite magazines intact I rarely re-read them and think it’s a shame not to revisit the images more often. So there we go. Tank is still available in WHSmith now if you want to pick it up, I highly recommend it. Of course I’m going on about the pictures so much because they were what struck me first, but there are some great reads in there and it’s refreshing to read something that takes more than a lowly 20 minutes to read cover to cover. You can read The Style Crusader’s post all about Tank on her blog by clicking here.

Next up number three is a cheeky addition as technically I got this pop phone for my birthday in February from my boyfriend. Incase you don’t know, a pop phone is a conventional cord phone which plugs into your mobile so that you can call people from a retro style handset. Being as talkative as I am, a five minute phone call to me always ends up being an hour long and a mobile isn’t the comfiest thing to have pressed up against your ear. Enter my pop phone, so much better to natter away on while lying on the sofa and you feel like you’re in a movie, so you can’t go wrong. It has only been in the last month that I’ve started using my bright green pop phone when I make calls at home as I had a few teething problems with my old mobile which didn’t want to connect to it, and kept hanging up calls whenever the recipient answered the phone. Doh! But now it connects like a dream, there’s no volume or quality issues and I love it! You can get these from most techy stores for around £20 and I’m pretty sure my boyfriend bought me mine from HMV, so there we go!

Number four is the most amazing polish I’ve bought in a while and I apologise that you can’t see it that well in the header image. It’s Barry M’s Lavender Hexograms and despite my best efforts the only place I could find it was at the Barry M stand in Topshop’s Oxford Street store other than on the Barry M site. As you may know I’m a sucker for glitter polishes and this is a glitter lover’s dream. The polish is made up of large purple hexagon glitter particles as well as regular purple glitter with a clear base. I wouldn’t wear this on its own as it wouldn’t be as effective, but it’s great as a glitter topcoat. I’m big fan of the Barry M nail polish formulas anyway so I didn’t think twice about picking this up for £2.99, but I’m so glad I did as it looks absolutely amazing. As soon as I got home from Topshop I started playing around with this polish and layered it over Grey Matter from Rimmel which is one of their 60 Seconds nail polishes. Here are the results.

Number five is the Mary-Kate and Ashley April issue of Elle which came out this month and which I couldn’t get my hands on fast enough. As a coveter of all that is MK+A I loved this insight into their world and of course the gorgeous images from both the cover and the interview. I won’t go too into the magazine, (which is still available by the way), because I posted about it in my Mary-Kate and Ashley style inspiration post this month so click here to check that out.

Number six is the most recent purchase and discovery from the March favourites and it’s the Vaseline Creme Brulee lipbalm. It’s pretty much a no-brainer as I already love the Vaseline Rose lipbalm, am definitely a dessert person and can always use some hydration for my dry lips so hey presto, I picked it up at Superdrug. I resisted for a few weeks after initially spotting it as I thought I had so many lipbalms I just didn’t need another, but for £2.99 and with an uh-ma-zing smell I could resist no longer. As you’d expect from Vaseline it does the job and keep my lips feeling super hydrated and smooth, it leaves a light gloss on the lips but it’s not sticky and it lasts quite well so re-application won’t be a constant issue. Did I mention it smells like creme brulee? Big thumbs up from me.

Last but by no means least number seven is my amazing gold jumper from H&M which is possibly one of the best things I have ever bought. Yes, ever. It’s probably too early to say, but I don’t think I will ever get tired of this. Again, it’s the crazier items in my wardrobe (like the floral jeans) that I find most versatile because you can pair them with anything. If you clash them it’s cool, and if you pair them with basics it’s not too overwhelming and is more understated, so this jumper is so easy to wear. For £9.99 I think this was an absolute steal and I love pairing it with statement necklaces and skinny jeans. Instead of ending up writing a lengthy love letter to my jumper I thought I’d just link you to my OOTD post where I wore it and talked about it some more, and then show you a picture of me wearing it.

That’s it for this month’s favourites, what have you been loving this month and do you have any suggestions of things you think I’d like? Let me know by leaving me a comment or tweeting me @MillieDelacoe. As more and more get uploaded I’ll pop some March Favourites videos below from some of my favourite Youtubers for you to check out, but that’s all for now! Don’t forget to keep your eyes peeled for the April dates you need in your diary post which will be up on Sunday the 1st April! Until next time…