So far this week on the blog has only been about one thing, who is the fairest of them all? That’s right, I’ve been pitting two on screen Snow Whites against each other in the ultimate style off. It was all about Kristen Stewart yesterday, with a lookbook of gorgeous, super stylish images of the star (click here to see that). On Monday Lily Collins was centre stage as we looked at her best fashion moments to date (click here to see that). Today, they’re really going head to head as we engage in a lighthearted fash-off and decide who should really take the style crown. 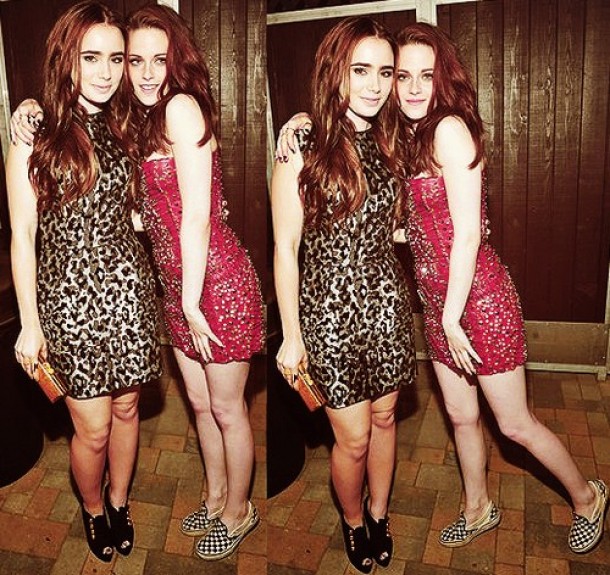 Split into categories the girls style credentials will be judged for an overall style winner, and of course, I’d love to know which looks you love on each girl best, so be sure to join in, in the comments!

We’ll start off with the vintage look, both Lily and Kristen have been gorgeously photographed for reputable magazines in an array of vintage style gear. Lily was part of Vanity Fair’s amazing ’20s themed Hollywood issue this year and Kristen has gone all retro in more than one shoot, as well as this month’s fabulous Elle, there was also that W shoot last year, a picture from which we’re using here.

I love this look on Lily as the soft blush colours are gorgeous with her complexion. There’s top marks here for being on the front of Vanity Fair with a whole host of Hollywood up and comers too!

This is one of my favourite Kristen shoots ever, and being as it’s gone all ’60s and given her an amazing polished make over, this one swings it for me! Utterly fabulous.

Blue lace on the red carpet

Both of our lovely girls have graced the red carpet and paparazzi’s flashbulbs in stunning blue frocks. For Lily, the Vanity Fair Oscars party was where she made a huge fashion impact in Monique Lhuillier and for Kristen the Nickelodeon Kids’ Choice Awards saw her pulling out all the stops, but whose was better?

Lily in Monique Lhuillier at the Vanity Fair Oscars Party:

This dress couldn’t be more elegant, and it featured highly on my Oscars best dressed list. That piercing blue against Lily’s pale complexion is a match made in heaven and the striking dress seriously gave Hollywood heavyweights a run for their money. 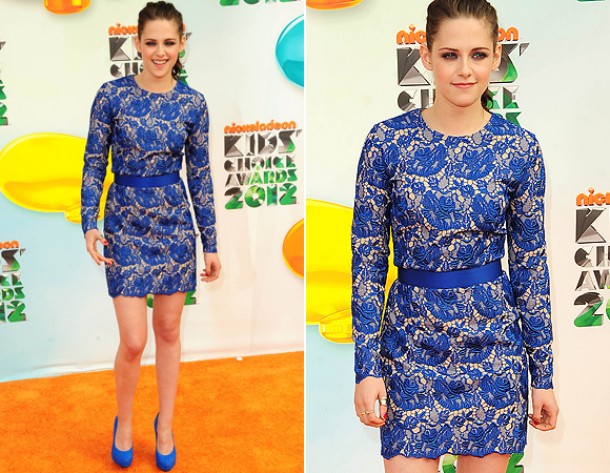 I do love this look on Kristen, but there’s something a bit too Kate Middleton about that dress. It almost reminds me of Kate’s blue Erdem number that she sported in Canada and for that, I’m giving the edge to Lily!

In Herve Leger by Max Azria

Here we have it, Kristen and Lily in the same Herve Leger by Max Azria dress, who’d have thought it? The girls both donned this dress in 2009 for two separate events, Lily for a Herve Leger event, and Kristen for an Adventureland premiere. 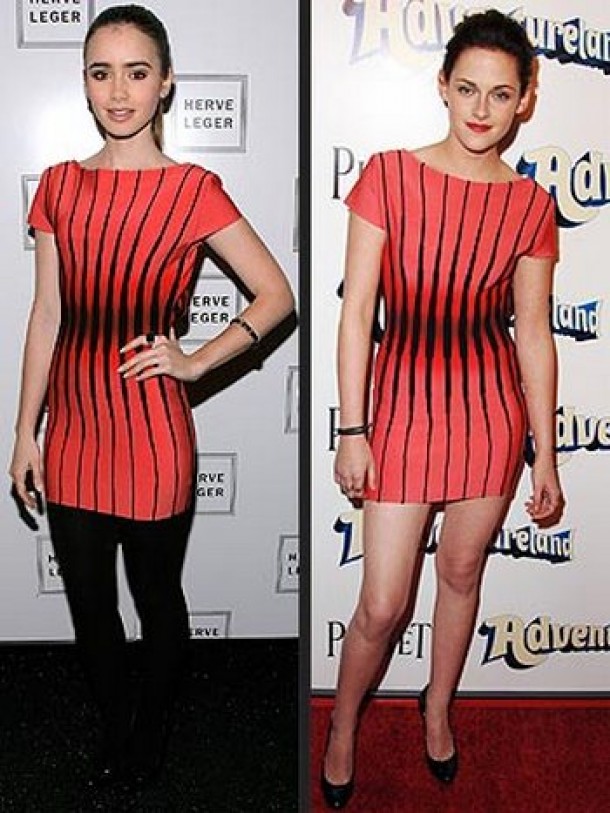 Despite Kristen’s cool ‘do and daring to bare her legs, for me this one is hands down Lily, for wearing the dress with serious panache, I love the tights and updo combo. Kristen lets the dress wear her a little more here and I’d have loved to see her giving it a bit more of an edgy vibe.

As you may know, in my world grunge is the new black. I can’t get enough of slobby, burnout style tees, scruffy jeans and devil-may-care wardrobe choices, which is weirdly unlike me. Of course, I had to include a little grunge-off between the girls and being the queen of laidback styles, Kristen might take the cake on this one. 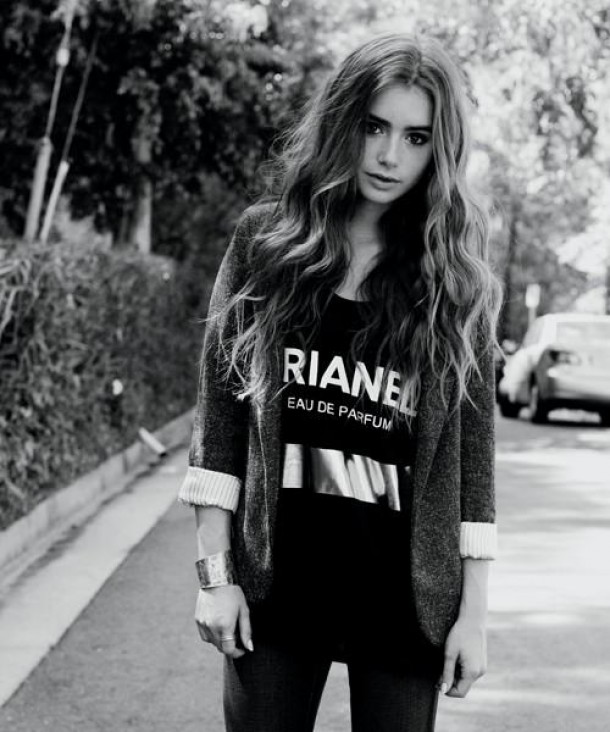 I featured this image in a recent grungy style inspiration post (click here to see that) as I utterly love the blazer and tee combo with that tousled hair. It’s a winning combination.

Kristen arriving at a London studio in grungy get up: 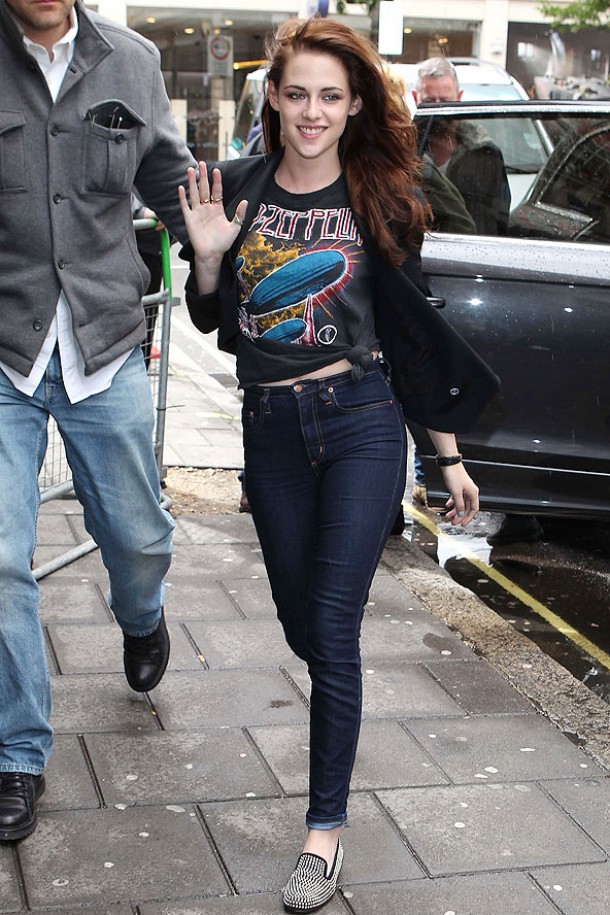 Jeans, a band tee, spiked slippers, this look screams laidback rock chick and I love it! Top marks for tying her tee for a more flattering fit too, that girl knows her way around casual yet chic daywear. It’s a win.

This year’s Met Ball saw a barrage of fabulous frocks hit the red carpet, or the red stairs should I say, of the Metropolitan Museum in New York, (see my round up of the best dressed here). Among the throng of the rich and famous, eager to see the Elsa Schiaparelli and Miuccia Prada exhibition were none other than Lil and Kristen.

Lily Collins in Valentino at the Met Ball 2012: 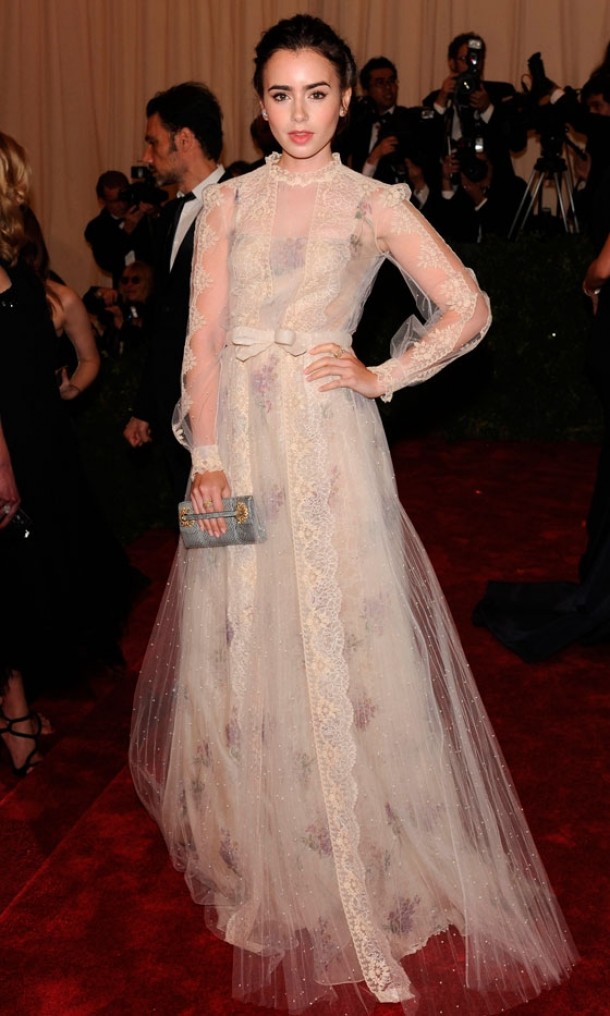 If you want to be a fashion superstar, you’re definitely on the right track if you turn up to an event wearing the same designer as Sarah Jessica Parker. Both SJP and Lily sported Valentino for the ‘fashion Oscars’ as it’s been dubbed. Lily definitely made a statement in this slightly Victorian, super cute floaty frock. It reminds me of the gorgeous Elie Saab dress that Jessica Biel wore for the Golden Globes, (click here to see that) and for that Lily gets serious style points.

Kristen Stewart in Balenciaga at the Met Ball 2012:

Oh horror of horrors, how could Balenciaga get it so wrong? I usually think that Kristen can do no wrong in the style stakes either, but this was an (albeit awful) blip in her otherwise fabulous fashion life. We won’t talk about this outfit again.

It’s the final leg of the battle, and it seems as though Lily is going to take it, however we’ve one category left, off duty, and of course this is Kristen’s forte. Could the girls actually draw? We’ll see…

Lily out and about in L.A: 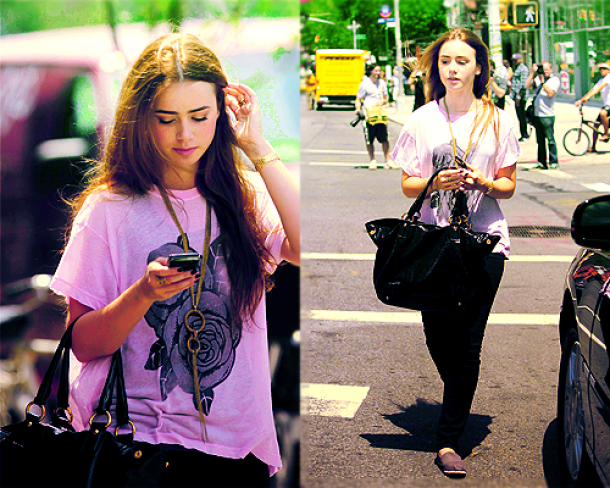 I love the tee, the hugely oversized necklace, and the equally oversized bag, but the shoes just aren’t doing it for me. Top marks for the natural style hair though and the all important fact that that outfit looks super comfy! Nice one Lil.

Kristen out and about in L.A:

This, is why she’s the queen of off-duty. Kristen’s laidback style is unrivalled, and how she manages to make the simplest things look quite so chic is beyond me. The overall slobby, could-care-less attitude of this outfit makes it that much cooler, and the wavy locks and super sunnies make this an overall winner in my book.

As I feared we’ve come to a draw and that means I need you guys to tell me whose style you love best to fully crown a winner. While Lily’s taken the points for red carpet dressing, Kristen knows how to keep her look casually cool day after day and therein lies our draw. Would you have marked them differently? Did you love a look that I didn’t? Let me know who your winner is by commenting below or tweeting me @MillieDelacoe.

Unfortunately that’s it for the Snow White Battle, it’s been so much fun and I hope you’ll still get involved. Let me know what you think of Snow White and the Huntsman too as I’d love to know before I go and see it for myself! Until next time…

Disclaimer: All images link back to source.